Researchers use microscopes as an essential tool for advancing their science, and objective lenses are crucial components of the system. Many applications benefit from high-quality images with a large field of view, but there is usually a tradeoff where improvements in one area of imaging, such as flatness, lead to a decrease in another area. Thanks to novel manufacturing technology, Olympus X Line high-performance objectives offer improved optical performance in three critical areas—a larger numerical aperture (NA), better image flatness, and a wider range of chromatic correction. These advances enable high-quality, large field of view (FOV) imaging for versatility in numerous applications.

Conventional objective lens manufacturing technology forced a tradeoff between numerical aperture, image flatness, and chromatic correction, making it difficult to improve all three in one objective. In the past, our engineers concentrated on making objectives that were exceptional in one of the three areas discussed above so that users could choose the objective that best suited their application. These objectives were engineered to acquire high-resolution images in a relatively narrow area (smaller FOV). Sometimes, these images were problematic when using image analysis software since the processing algorithms normally assume that the images have no optical aberration or peripheral darkening. It is difficult to obtain reliable, accurate processing data unless the objectives deliver high-resolution, high-quality images over a large FOV. The advanced manufacturing technology behind X Line objectives solves these challenges.

An objective’s NA is a measure of its ability to gather light. It is an important factor in determining the resolution, depth of focus, and the brightness of images. Objectives with a larger NA gather a wider range of light, resulting in brighter, higher resolution images. NA is important when observing extremely fine structures or detecting dim signals during fluorescence observation. In X Line objectives, such as the UPLXAPO40XO, an NA of 1.40 is maintained without deteriorating other aspects of the optical performance (Figure 2).

Figure 2. Improved NA with no deterioration in the chromatic correction range

An objective’s image flatness is limited by a lack of sharpness caused by spherical and coma aberration, astigmatic aberration, and the effect of field curvature and peripheral darkening. Image flatness is an important indicator of the reliability of quantitative analytical data from observations that require a high resolution over a large FOV. Our X Line objectives provide outstanding image flatness from the center to the periphery without sacrificing NA or chromatic correction, even in large FOV observations.

Figure 3. Comparing the image flatness between the conventional PLAPON and the X Line UPLXAPO objectives

Lenses are made of glass, and glass has a different refractive index for each wavelength of light. The lens’ inability to focus different wavelengths of light in one spot is called chromatic aberration. During microscope observation, correcting for chromatic aberration is important for acquiring quality images. With lenses manufactured using conventional technology, such as the UPLSAPO60XO and the PLAPON60XO, the chromatic correction ranges are 435–1000 nm and 435–656 nm, respectively. Because of these ranges, the focus position is not colocalized for short wavelengths (< 435 nm) and long wavelengths (> 656 nm) for the UPLSAPO60XO. By contrast, the UPLXAPO60XO X Line objective has a chromatic correction range of 400–1000 nm while maintaining an NA of 1.42 (Figures 3 and 4). 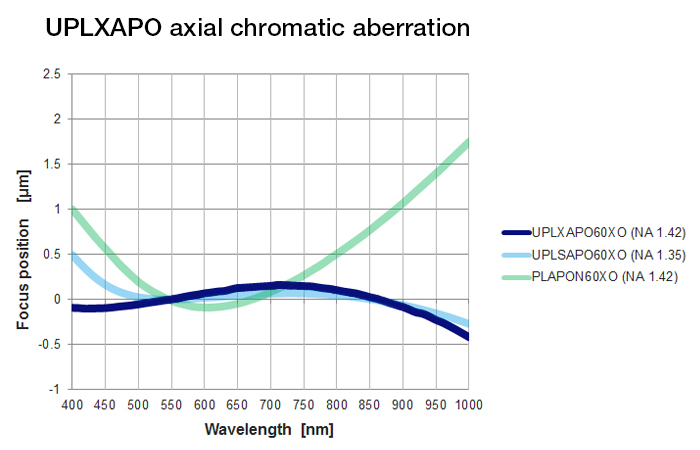 Figure 4. Comparing the focus position in the 400–1,000 nm wavelength range (smaller is better)

Olympus has been designing and manufacturing objectives for 100 years. With extensive knowledge and expertise over the years we have developed a novel proprietary lens polishing technology. This technology enables us to manufacture convex lenses with ultra-thin edges as well as ultra-thin concave lenses. The lens’ shape enables capturing of light at a wider angle than conventional lenses. Because they are so thin, more lenses can be packaged in each objective housing, enabling us to increase the NA, image flatness, and chromatic correction range.

The microscope objective is composed of several convex and concave lenses with different refraction indices to correct various optical aberrations. These lenses are combined in 45mm length, the international standard. A simple model of a convex-concave-convex three lens system can be used as an example to understand the improvements made on the X Line objectives. These improvements consist of increase in numerical aperture, image flatness and wide range chromatic correction（Figure 5z. Composite focal length of 3 lenses (f) is defined by the equation below. Composite focal length is a constant value which determines magnification of objective.

Expansion of NA: for high resolution and high S / N

To design objectives with high numerical aperture (NA), h1 should be higher because the wider angle for collecting ray is required. Furthermore, high NA is associated with high h3 (pupil radius) coefficient through the equation of h3=NA×f.  In order to obtain high h1 and h3, effective diameter of lens should be increased. In order to improve the NA while maintaining the total length (45 mm) of the objective lens, it is necessary to make the rim of the convex lens (the thickness of the lens outer peripheral part) t (Figure 5-2 (a)) extremely thin. (Figure 5-2(b))

Figure 5-2. The effect of an ultra-thin edged convex lens

Improving Image Flatness: Acquisition and observation of uniform and clear image around the field of view 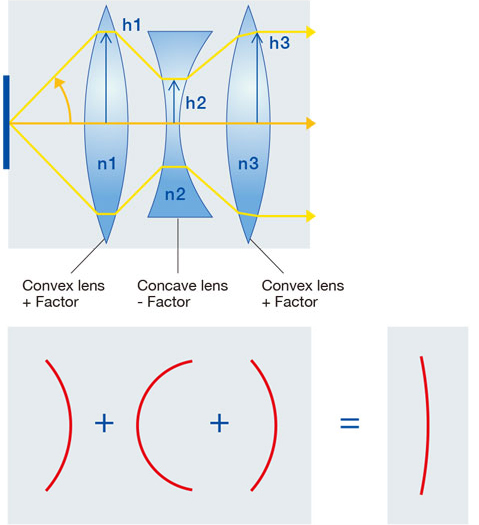 To create a small value of P, both f2 and h2 coefficients should be lowered, since h3 becomes constant to control the magnification of the objective (composite focal length, f) and NA. The coefficient h2 can be lowered by increasing the distance between convex and concave lenses, however in the limited space, thin center concave lens with small (d) is required. (Figure 5-5)

For wide range correction of chromatic aberration, several cemented lenses composed of 2 or 3 lenses are required. Furthermore, thin lenses are a crucial component in a limited space.
In the conventional design with 13 lenses in 7 groups, the performance was as shown in the left figure (C). Design using ultra-thin lens with 15 lenses in 9 groups can greatly improve the performance as shown in the right figure (d). (Figure 5-7).

As described above, the X Line objectives are designed by using ultra-thin lenses while maintaining the overall length of the objective lens at the international standard of 45 mm, which is compatibility with existing microscopes. The improvements in design and manufacturing have led to creating the X Line objectives, with high NA, improved IF and wide wavelength range CC.

The manufacturing process for X Line high-performance objectives is sensitive to fluctuations in the production line, so advanced wavefront aberration control is applied during the assembly process to assure consistency from one objective to the next. (Figure 6a and 6b).

The X Line objectives have an improved image flatness compared to conventional objectives, which is beneficial for whole slide imaging applications. One of the X Line objectives, the UPLXAPO20X, has a numerical aperture of 0.80, significantly improved image flatness in the entire FOV (Figure 7b), and improved resolution when compared to a conventional objective (Figure 7a). These improvements yield better image quality in each image as well as more efficient acquisition of tiled images.

The NA improvements of the X Line objectives also help with fluorescence imaging. An increase in NA correlates to less photons needed to illuminate the sample reducing phototoxicity and photobleaching during fluorescence observation. The images are consistently bright over the entire FOV, which leads to more accurate analysis.

Qualitative analysis and imaging with a large FOV are common thanks to advances in digital technologies. For your analysis to be reliable, high-quality raw data are essential. Figure 10 shows fluorescence images of nuclei stained with DAPI (405 nm excitation wavelength) acquired with different objectives and analyzed to automatically recognize nuclei using analysis software. Peripheral nuclei are not accurately recognized in the image acquired with a conventional objective because the 405 nm excitation wavelength is outside the chromatic correction range, and the image flatness is poor (Figure 10a). However, using the X Line objective (UPLXAPO60XO; NA 1.42), even peripheral nuclei are accurately recognized because of the improved chromatic correction of X Line objectives at 405 nm (Figure 10b).

High usability of the X Line UPLXAPO40XO objective with an NA of 1.4 enables efficient experiments

Conventional 40X objectives have a relatively large FOV and are suitable for observing multiple cells. Consequently, users often employ 40X objectives to search for a region of interest and then switch to higher NA objectives, such as a 60X or 100X objective, to acquire high-resolution images.

The UPLXAPO40XO X Line objective has an NA of 1.40, which is equivalent to that of conventional 60X or 100X objectives. This enables the user to acquire images with adequate resolution over a relatively large FOV using just the 40X objective as shown in Figure 11. There is no need to change objectives or add oil, and the risk of losing the sample’s position is minimized.

The technological advancements introduced by our advanced lens polishing technology enabled us to realize the world’s first Plan-Apochromat objective with an NA of 1.50. These high- resolution objectives work well for super resolution or TIRF imaging.

*1 Although it became one of the most important cell lines in medical research, it’s imperative that we recognize Henrietta Lacks’ contribution to science happened without her consent. This injustice, while leading to key discoveries in immunology, infectious disease, and cancer, also raised important conversations about privacy, ethics, and consent in medicine.
To learn more about the life of Henrietta Lacks and her contribution to modern medicine, click here.
http://henriettalacksfoundation.org/

We use cookies on our website to give you the most relevant experience by remembering your preferences and repeat visits. By clicking “Accept All”, you consent to the use of ALL the cookies. However, you may visit "Cookie Settings" to provide a controlled consent. Read More
Cookie SettingsAccept All
Manage consent

This website uses cookies to improve your experience while you navigate through the website. Out of these, the cookies that are categorized as necessary are stored on your browser as they are essential for the working of basic functionalities of the website. We also use third-party cookies that help us analyze and understand how you use this website. These cookies will be stored in your browser only with your consent. You also have the option to opt-out of these cookies. But opting out of some of these cookies may affect your browsing experience.
Necessary Always Enabled
Necessary cookies are absolutely essential for the website to function properly. These cookies ensure basic functionalities and security features of the website, anonymously.
Functional
Functional cookies help to perform certain functionalities like sharing the content of the website on social media platforms, collect feedbacks, and other third-party features.
Performance
Performance cookies are used to understand and analyze the key performance indexes of the website which helps in delivering a better user experience for the visitors.
Analytics
Analytical cookies are used to understand how visitors interact with the website. These cookies help provide information on metrics the number of visitors, bounce rate, traffic source, etc.
Advertisement
Advertisement cookies are used to provide visitors with relevant ads and marketing campaigns. These cookies track visitors across websites and collect information to provide customized ads.
Others
Other uncategorized cookies are those that are being analyzed and have not been classified into a category as yet.
SAVE & ACCEPT